Posted by Victoria Reynolds on
· No Comments

There is so much happening in the world right now that sometimes it can feel a bit overwhelming. All of it depends on which side of the kaleidoscope each of us are choosing to look through.

Looking through the wide lends, backward through to the eyepiece, there is only one limiting perspective. This limited perspective is often the viewpoint of those around the viewer and many times based on outmoded beliefs that don’t really serve anyone. Many people simply can’t see any other perspective because that one-way aligns with what they have always believed. The idea of believing something new often creates inner-chaos. This inner-chaos is what psychologists refer to as Cognitive Dissonance. Those who are open-minded enough to understand that their limiting beliefs may not be in alignment with their greatest good, have no trouble turning the kaleidoscope around and seeing the beauty of multiple perspectives.

This morning, as I spent time at the gym giving my body it’s much needed exercise, the concept of seeing resistance from multiple perspectives came through. The #Resist movement is gaining momentum for the movers and the shakers who are using this time to move humanity forward and shake up the status quo. Aka, free humanity from the controls of fear and patriarchy so that we can all live together in balance and harmony. Ultimately, that is what we all seek, whether we realize it or not.

What came through in my questioning was a multiple perspective of resistance and the energy needed to create the world we all say we desire. For those who are a follower of Abraham, this is especially juicy.

“As our Dear One Abraham teaches and many spiritual teachers understand, what you resist persists. Resistance as a form of fighting against. Againstness has never solved anything. Againstness only keeps you stuck in the very thing you resist. As long has your focus is on what you don’t want, you will get more of the same, simply because that is all that you can see. Resisting what you don’t want causes a force to constrain you and as such, resistance is futile. In your againstness and resistance you are pulled back and assimilated into the fear, the very thing you are attempting to fight against. Imagine that you are a rubber-band, pulling away from what you resist. This pulling away from, resistance, can only holdup for so long before it swings backward, into the very thing you are attempting to pull yourself from. If your focus is on what is behind you, fighting against becomes exhausting. If you are able to change your focus from what you are against, and rather 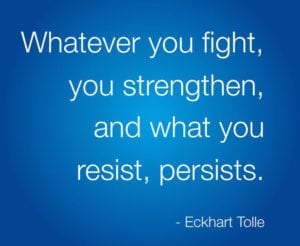 maintain your holding pattern, this allows you to then persist forward. Rather than fighting against, you can resist being assimilated by holding in your truth and resilience while looking forward. This holding stance gives you the ability to refuse being assimilated while not fighting against the old consciousness. Holding in neutrality than allows you to focus on what you want without being pulled back and out of shape as you lose yourself in the fear. From neutrality you are able to tap into the persistence necessary to push forward. Push forward long enough and the pulling of the past has no choice but to eventually let go and propel you forward. Persistence is powered by love and is far more powerful than resistance which is forced by fear. This isn’t to say of course that you turn blindly the other way so that you cannot see what is behind you. Looking in the rear view mirror as you progress forward is a safety check and a measure for how far you have come. Persist rather than resist is the consciousness that is necessary to create permanent forward movement. Decline to be assimilated and pulled backward, hold yourself with grace and dignity, and move forward with conscious action into the desired future that serves all life on earth, rather than the few who see themselves as being above all others. Persist, rather than resist, is the focus that you seek.”

I asked once why Yeshuah (the teacher many call Jesus) used metaphors and why the Divine Feminine speaks to me in metaphors. She replied that metaphors and stories allow human beings to understand what is being taught from the perspective of where they presently are. One of the issues with our religiosities is that many teachers are 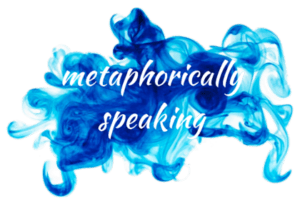 The #Resist movement is working, not because of what it is resisting but because of what it is persisting. Women, and forward-thinking men, are no longer accepting what they cannot change, because they have accepted that they themselves are the change. While there are some who are “fighting against,” the core energy of the movement itself is “pushing for.”  This pushing is how we give birth and nurture a new reality based in love, rather than holding in the constraints of fear.

And yes, just in case you were wondering, I am a Star Trek fan.

Until next time be fearless, fabulous and free!

Victoria is a Story-Healer, Author, Speaker and Filmmaker. She uses her own personal unique blend of business, learning experiences and spiritual psychology to help others have their voices and messages heard.