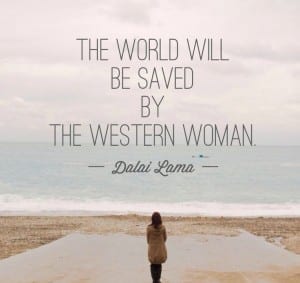 It took me a very long time to find the courage to speak my truth. In some ways I’m still working on it.

Why?  As a child my voice box was broken and it’s still being repaired. Collectively as women, many of us are still struggling with thousands of years of being kept small. I had the opportunity a few weeks ago to meet with Neale Donald Walsch, one of my favorite authors and a man with the gift of conversing with the Divine, a gift I also have but have been afraid to admit. In our conversation I admitted that there is an underlying fear that my head will be lopped off for speaking my truth. I wasn’t all that surprised when women in the audience said they have felt the same way.  It seems that being hung, having our throat slit, burned alive or drowned, just for being strong, opinionated women still rests in our collective DNA.

As a little girl I was not allowed to have a voice. This went beyond the old saying of children being “seen and not heard.” It was a pervasive belief in my community and within my parent’s fundamentalist religion that females had nothing of value to say.

Looking back I suspect I was more boisterous and outspoken than most girls or possibly most children for that matter. We were taught to keep our arms folded, our legs crossed, our mouths shut

and our minds closed.  I had an issue with these rules according to my parents and I was constantly reprimanded for being too loud and opinionated. I was even told once by my mother that at a point in history I would have been burned as a witch for having my opinions. Talk about scaring me into keeping my mouth shut. Even my own mother fell for the belief that men and their opinions mattered more than women’s.

Yet somehow my spirited, and what my parents and everyone around me called my rebellious and stubborn nature, could not be completely squelched, at least not as easily as my parents and my leaders would have preferred. I refused to play the role of the subservient and meek female I was expected to be. It isn’t that that I did not want to be what I was expected to be, I really did want to be good girl, it just wasn’t in my nature to sit still and keep my thoughts to myself.

I’m sure I would have been labeled with some kind of disorder if the labels existed back then:)

That was until one day when I took my desire to be seen and heard to the stage. It was during a fundraising auction for a community/church event (they were one and the same) where teenage boys stood in front of a crowded room and offered up their time and services to the audience. I proudly took the stage among the boys in full confidence that what I had to offer was just as valuable as anything they could offer. Unfortunately for me and my already fragile self-esteem, my actions were considered blasphemous and members of the audience booed me off the stage.

The humiliation of that experience and not being recognized for having any value affected me unconsciously for much of my life. It took me another thirty years to take the stage again. And it took me just as long to write my story and tell it in confidence. That was, until my calling to inspire others finally overtook my fear of being ridiculed.

Now I proudly share my story with others through public appearances and in my writing. My story finally has a voice. Giving a voice to my story has been truly transformational in so many ways.  And the best part is that in sharing my story and my truth, I have seen it change the lives of others and I can finally see the value in my story, and in me. Seeing the value in my story gave me the ability to not only forgive it, it gave me the ability to learn how to love it. And it gives me the ability to see the power in other people’s stories as well. We all have a story and we are all on our own transformational journey.

I’m not the only one finding the courage to speak my truth. Women all over the world are standing up and becoming the leaders we were born to be and birthing a new humanity, rather than just babies. We are the ones the world has been waiting for. We are the voices in the forest that will heal the hearts of humanity and heal the earth. As the Divine Feminine is resurrected to take her place beside the Divine Masculine, in balance, equality and harmony, women are coming out from under wraps and from behind closed doors. Our messages of strength, courage, compassion and healing are just what humanity so desperately needs and our gifts are finally beginning to be recognized for their true value.